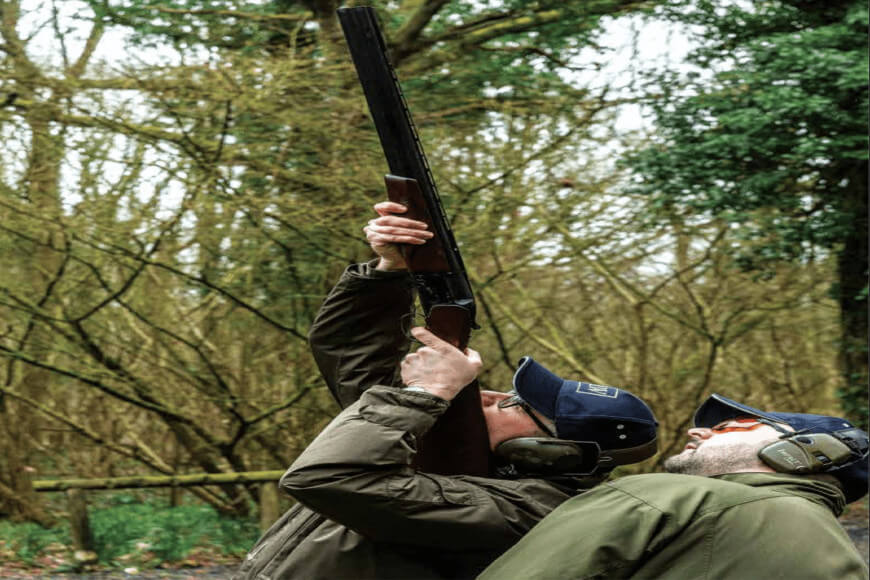 Lady’s Wood recently welcomed Shooting Gazette editor Martin Puddifer for a series of lessons with manager and instructor Chris Hanks. The Shooting Gazette published this shooting tips article in its June 2019 edition. Martin discusses the importance of footwork in improving his shooting consistency.

Shooting tips article: It’s all in the footwork

Footwork was going to be a huge part of my second lesson. I’ve often been a little nervous about adjusting my stance when shooting. I prefer not to take the shot rather than risking being unsafe. I’m also guilty of taking things instructors have said in the past too literally. One step forward for me is probably a step and a half in your book. At the same time I attempt to copy the grace with which so many of my peers have moved around to address their quarry without clearly understanding how moving in a certain way makes you a more successful shot. This would be yet another lesson in taking my time. “Fail better” would be my mantra.

Chris and I started the lesson with some straight driven targets from the 40ft tower. Prior to calling for the first clay I pre-empted his reminders by quietly repeating what we’d covered in the first lesson, namely that my stock should be closer to the side of my chest than my hips, that the gun should not see-saw on its way up to my cheek and keeping the gun moving after pulling the trigger.

Of the first six clays, four will never be seen intact again. I hope this doesn’t sound too overindulgent, but it’s finally dawned on me that it doesn’t matter if I miss. I just need to miss better. This seemingly obvious realisation has helped me to relax before the first clay and after the first miss. There is always another one coming, after all.

At the same time, I am slowly learning that if two or three clays have been hit in succession, I should still treat the next one as though it is the first of the day. I never need to “go for the hat-trick”, I just need to remember what I’ve got to do to hit the clays in the first place. Whatever happened during the lesson, the only people who’d see it would be Chris and myself.

I then needed to get used to moving my feet and body while on peg, in order to get into the most comfortable position to shoot. This would then help me improve my technique and consistency.
when shooting crossing birds and, ultimately, my bogey bird: the right- to-left crosser. This would need more lead than my preferred left-to-right crosser and would, therefore, reinforce the need for fluidity in the movement and remind me of how much time I had before pulling the trigger. At first, I stood at a right-angle to the tower to shoot the crossing targets (feet in the correct place).

“Don’t forget, you don’t know which way the birds are going to come on a shoot day,” Chris explained. “This way you can step into the shot whichever way the clay or bird takes flight towards you.”

Chris then proceeded to show me a useful example of what the ground looks like after a graceful shot has been moving their feet to address a crosser, namely that the rear foot is relatively stationary, apart from pivoting or small steps into the direction of the bird, but the leading foot has been stepping towards the targets presented, marking the ground where they stepped. What I would need to do is see the clay in my peripheral vision, mount the gun on to it and while doing so turn and step into the shot. This would mean that when the time came to pull the trigger my body would still be in the correct position to take the shot with plenty of swing left to follow through.

The first few attempts were OK. I was getting used to picking up the clays in my peripheral vision before bringing the gun up. With a small step forward and turn I immediately noticed how much more comfortable a seemingly difficult shot like this for a left-hander could now become. My line was good. The only reasons for a miss were I wasn’t giving it enough lead, the stock was coming off my cheek slightly or I was shooting over the top because I was rolling my shoulders.

Later, I was trying to articulate my interpretation of lead to my ever-patient instructor. I mentioned to Chris that when I managed to hit a right-to-left I felt as though I was firing into the thin air in front of the clay. His eyes lit up. “Exactly. Imagine a footballer passing a ball for a teammate to run on to rather than passing to their feet.” This example was so simple but a massive penny dropped. If it felt right to pull the trigger at the thin air in front of the clay as the latter headed towards it then why not view it that way?

We tried again and this time, with a conscious effort to see the clay in my peripheral vision but in essence pull the trigger at nothing, three out of the next six clays were obliterated. Those that weren’t were a result of me giving too much lead or stopping my swing. After countless lessons and explanations of this simple act,
I finally had a visual picture I could understand. Shoot into thin air in front of the clay. How blind had I been?

I’m much more instinctive with left-to-right crossers. Despite the fact that my front foot would now be heading right, I still felt extremely comfortable taking a step forward into the shot. It didn’t necessarily have to be quite as pronounced as the opposite side. Here the idea of shooting into thin air came much more naturally. I dusted more clays on this side and it felt good to be making the progress I was. We ended the lesson on the 120ft tower. Straight driven birds and the odd crosser provided a taste of what was to come in the third lesson. A few months ago I’d never have got near some of those clays. With Chris’s encouragement, I dusted more than I expected.

The first test came a week later during a day’s simulated shooting at Bryngwyn Hall in Powys. Here we’d shoot a partridge drive, two grouse drives and two high pheasant drives. Owing to a fault with my gun I had to use one kindly loaned to me by host Lady Linlithgow. It fitted me quite well. I explained the situation to my loader. He agreed that I should use the day as a way of practising technique. The clays were just what I needed. I will admit to struggling a little on the high pheasant drives. Everything seemed to come together, all helped immensely by the relaxed environment. I drove away from Bryngwyn Hall with a huge smile on my face; it wasn’t too dissimilar to the one I wore coming away from Lady’s Wood the previous week.

If you’d like to find out more about lessons at Lady’s Wood, click HERE. Don’t forget to buy your copy of the Shooting Gazette. Keep your eyes peeled for more shooting tips article soon!